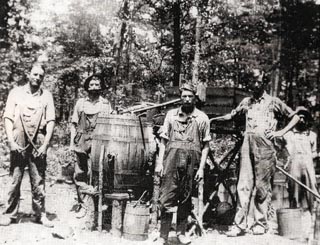 Moonshine in the North Georgia Mountains: In an era when corn was plentiful and dollars were not, Rabun County men, like their neighbors in much of Appalachia, turned to the production and selling of moonshine to put food on the table for their families.


Moonshine in the North Georgia Mountains

In an era when corn was plentiful and dollars were not, Rabun County men, like their neighbors in all of Georgia and much of Appalachia, turned to the production and selling of Moonshine in the North Georgia Mountains to put food on the table for their families. By definition, moonshine is any distilled spirit made in an unlicensed still. In southern Appalachia, where corn was a staple crop used both to feed livestock and to grind into meal for making bread, excess yield could be turned into cash, a commodity difficult to come by in hard times.

In Rabun County, the rugged pioneers who first settled these mountains were mostly of Scots-Irish stock.  Their forebears had migrated from southern Scotland to Protestant northern Ireland and then to the American colonies. Not only were they independent, stubborn and self-reliant, which meant they frowned on government taxation and interference, they also had a whiskey-making heritage. Making whiskey or brandy involved two simple chemical processes, fermentation of the mash and distillation of the fermented product into alcohol by first heating and then cooling it. The process was simple enough that even those with limited resources could master it.

Although moonshine was made all over Georgia, Department of Revenue agent Johnny Brown summed up in 2006 the views of many, “You think mountains, you automatically think white liquor.” Stills were easier to hide in mountain areas, nestled in hollows and covered with vegetation. Making liquor was a craft, and practitioners took pride in producing a quality product. As Ray McClain said in a 1982 interview, “If they couldn’t make it good, then it wouldn’t sell.” Moonshiners of the past were admired in many circles for their ingenuity in making a living when few jobs were available and for their ingenuity in outsmarting the law.

Luther Rickman, who was Rabun County sheriff from 1917 through 1940, was the first sheriff to raid a Rabun County still. The advent of Prohibition in 1919 made the business of moonshining boom. Georgia had outlawed distilleries even earlier, in 1907. Demand for alcohol grew, and stills multiplied. In that era, sheriffs were paid $10 for breaking up a still and an extra $40 to $60 for catching the operator. Rickman and his deputy did not, however, go out on raids unless informers turned in a moonshine operation. Sometimes tipsters would leave anonymous notes, and often those who reported the illegal activity were wives, disgruntled friends and neighbors, or competitors. Moonshiner Semmie Free described in a 1972 interview selling the white liquor for one dollar a gallon during “Hoover’s time,” the Depression era of President Herbert Hoover. If you could find a job as a laborer then, you might work ten to twelve hours to make that same dollar, said Free. He also admitted that after being caught and sent to jail numerous times, he would  “come right back home, and if I didn’t have a still, I’d have another made the next day.”

If revenue agents and local sheriffs did not locate and break up the operation early in the process, they would try to catch the haulers, or “runners” as they were called, who transported the “white lightning” to customers. The runners were known for fast cars and dangerous chases with lawmen, so much so that they are commonly believed to be the antecedents of today’s NASCAR stock car racers. Some hauls were made in trucks with the load covered by apples or cabbages, but often the vehicle of choice was a 1940 Ford car. Some cars had the back seats removed or special suspension and shocks installed so that the vehicle could carry up to 12 cases of moonshine. Some say certain cars could hold 16 to 20 cases. Deputy Cary Thomas said in an interview in 2000 that eighty percent of Rabun County’s moonshine production went to cities in South Carolina. Others say most was hauled to Anderson, South Carolina, with some to Greenville or to Athens, Georgia. One of Rabun’s most renowned lawmen for chasing haulers was Fay Blalock, chief deputy from 1941 to 1964. As one of his admirers described it, “You can’t get away from Fay. He had a fast car and he’d run you until the damn wheels fell off.”

The heyday of moonshine production in Rabun County was the decades between 1930 and 1960. By the late 1950s, law enforcement found an effective tool for controlling the manufacture of liquor by requiring merchants to report large sales of sugar or glass jars, two items which could not be homegrown. One Clayton grocer reported that prior to this requirement, two-thirds of his business had been the sale of sugar and jars. Although the number of stills declined after the 1960s, there were 129 moonshine raids in Rabun County between 1985 and 2000 alone, with arrests made as recently as 2006. Most of the activity has historically been in the Persimmon area or in the eastern part of the county near the Chattooga River, much of it on national forest property.

The moonshine product and business model have changed in recent years, as has the law enforcement approach. Today any lost tax revenue from the sale of illegal liquor is of less concern than the health threat. Lead poisoning is a major concern, as is the addition of ingredients like rubbing alcohol, paint thinner, formaldehyde, and chlorine bleach, all of which have been detected in today’s product. Moonshine consumption can be deadly. As Semmie Free so colorfully put it decades ago, “They don’t make nothin’ right no more…all this old stuff they make it out of now, hell, it’d kill a dead snake.” One former moonshiner even complained to The Clayton Tribunethis year that the new hybrid corn varieties are seriously lacking when it comes to manufacturing a quality product.

There is no doubt that the American public is fascinated by moonshine and the glamorized, romanticized view of Robin Hood manufacturers and haulers. As an example, two thousand people turned out in 2006 for a Moonshine Jamboree at Tallulah Gorge State Park. There is, however, a darker side to illegal whiskey making. Even as early as 1918, The Clayton Tribune was proclaiming that “statistics show that whiskey is the cause of 85% of all murders and other crimes in Rabun County.” Whether that number is accurate is open to question, but it is true that, historically, crime in Rabun County in the early and middle 20th century was largely related to alcohol consumption, and that alcohol was moonshine. The families who were destroyed by alcoholism and domestic violence felt no soft spot for moonshiners. The Clayton Tribune editorialized even back in 1918, “We’ve got to quit it, boys. Quit making it. Quit selling it. Quit drinking it.”

Today, there are much easier ways to make a living in Rabun County. One law enforcement officer, however, believes “it is unlikely the whiskey trade will ever die out completely.” Former Sheriff Don Page suggested that moonshine making was a “way of life” for decades. “There ain’t a family around here that didn’t dabble in liquor one time or another,” Page said. Yesterday’s whiskey and whiskey-maker are vastly different from today’s but the legacy is an important part of Rabun County history.

Carol Law Turner is an eighth generation Rabun Countian and a member of the all-volunteer staff of the Rabun County Historical Society. www.rabunhistory.org

Reprinted on this Blog with the permission of the Author and the Rabun County Historical Society.

Get A Good Night’s Rest at Beechwood Inn!

Now that you know that North Georgia is best explored on a weekday, it’s time to start planning your trip! At Beechwood Inn, our beautiful rooms suites and cabins provide some of the best lodging in the area. They’re the perfect place to rest and recharge after a day full of exploring! And our restaurant has been names one of the 10 Best in North Georgia. Check out our upcoming menus. 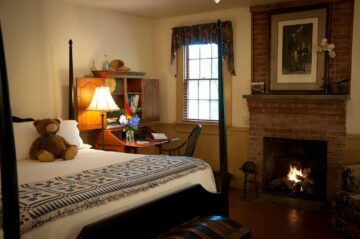