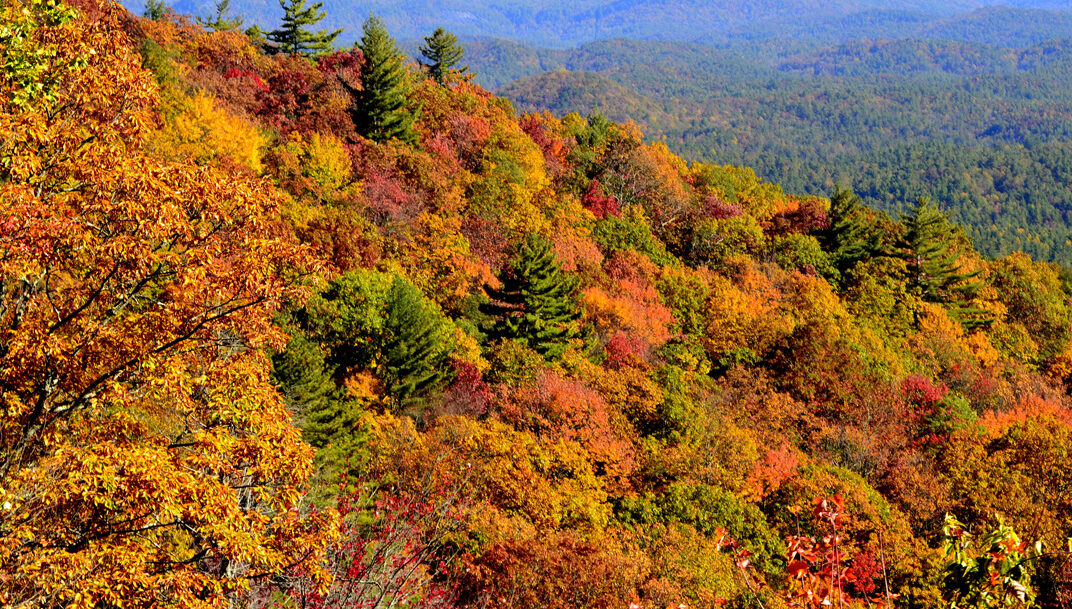 FROM MOONSHINE TO FINE WINE: THE GEORGIA WINE HIGHWAY

There was a time when people referred to Tiger, Georgia, as “Fruit Jar Junction” because of the bootlegged moonshine that flowed from the surrounding area. Even today you can drive the bootlegger‘s “short cut” down Syrup City Road named for the bootleggers who outran the revenuers on this route. Today, Syrup City Road is only one-tenth of a mile from Tiger Mountain Vineyards which is producing award wining European style wines. The Georgia Wine Highway starts once you cross into Georgia on Highway 441 from North Carolina. It turns west on in Clayton on Hwy. 76 which will lead you to Persimmon Creek Vineyards where you can taste their award winning Reisling, Merlot and other fine wines and enjoy their pastoral views.

Visitors to Foxfire will receive a rare glimpse of what life was like for the mountaineers who settled this area over 150 years ago. The Museum is centered around a collection of over 20 historic log cabins and replicas of traditional log construction designs, with some of the authentic structures dating back to the early 1800s. Visitors will want to visit the gift shop filled with folk art, handcrafted items, and books, including The Foxfire Book series. http://www.foxfire.org/

The Hambidge “Weavers of Rabun” gained international attention in the 40’s and 50’s and the product of Rabun County weavers was found on Madison Avenue in New York City. In 1947 the weavers were awarded a commission for the production of all of the fabrics for President Truman’s yacht, “The Williamsburg.” Today the Hambidge Center provides a retreat in our Northeast Georgia Mountains for artists, writers and creative thinkers who are awarded Hambidge Fellowships. It is located on 600 wooded acres on Betty Creek Road in Rabun Gap and is listed on the National Registry of Historic Places. It includes historic structures such as the Hambidge House, Rock House, a working grist mill, waterfalls, miles of trails and breath-taking vistas. http://www.hambidge.org/

Sixty two percent of Rabun County is National Forest that includes the Chattooga Wild and Scenic River, that provides whitewater rafting, as its eastern boundary and the Appalachian Trail on its Western side. The Tallulah District has more than 100 miles of hiking and ORV trails, five developed campgrounds, three picnic areas, one swimming area, hunting in two Wildlife Management areas and one hundred thirty nine (139) miles of trout streams. Rabun County also has three State Parks all with marked trails; Black Rock Mountain with 1,743 acres offers over 40 miles of trails; Moccasin Creek State Park has swimming and boating with 32 acres on Lake Burton and Tallulah State Park contains 2,689 acres and an Interpretive Center with trails and waterfalls.

Rabun Bald, with an elevation of 4,696 feet, is the tallest mountain in Rabun County and the second-highest peak in Georgia. It’s elevation is second only to Brasstown Bald at 4,784 feet. An observation tower on the summit of Rabun Bald provides hikers with views that, on clear days, extend for more than 100 miles. The hike to the top of Rabun Bald is four miles round trip via the Rabun Bald Trail, a part of the Bartram Trail. According to Native American legend, Rabun Bald is inhabited by fire-breathing demon people. Some campers still report hearing strange sounds throughout the night. Rabun Bald was the site of the first tower in the area, which was constructed by Ranger “Nick” Nicholson, the first forest ranger in Georgia.

Known as “Niagara of the South,” and one of the most spectacular canyons in the eastern U.S., Tallulah Gorge is two miles long and nearly 1,000 feet deep. Visitors can hike rim trails to several overlooks, or they can obtain a free permit (limit 100 per day) to hike down to the gorge floor. A suspension bridge sways 80 feet above the rocky bottom, providing spectacular views of the river and waterfalls. The names of the falls on the Tallulah River—. . Ladore (“L’eau d’or”), Tempesta, Hurricane, Oceana, Bridal Veil —are a litany to those who love the outdoors. Exhibits in the park’s Jane Hurt Yarn Interpretive Center highlight the rich history of this Victorian resort town, as well as the rugged terrain and fragile ecosystem of the area. Additionally, an award-winning film takes viewers on a dramatic journey through the gorge.